Criteria for assessment of the effectiveness of protective measures 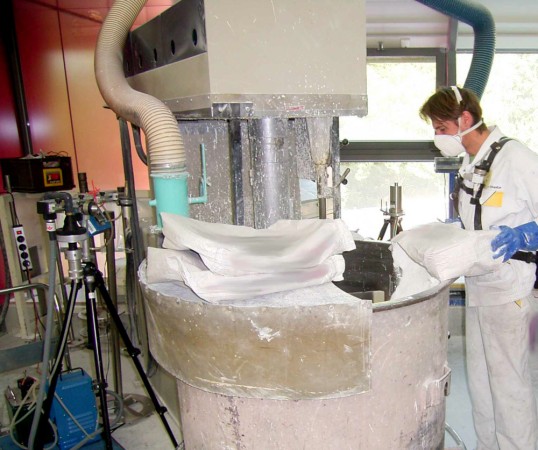 Measurement of the particle number concentration during the use of nanomaterials
Source: IFA

Proposals for limit values in the USA and UK

In 2011, NIOSH, the US OSH institute, proposed recommended exposure limits of 2.4 mg/m³ and 0.3 mg/m³ for fine (> 0.1 µm) and ultrafine (including intentionally produced ultrafine) titanium dioxide respectively [3]. British Standard BSi PD 6699-2:2007, "Nanotechnologies – Part 2: Guide to safe handling and disposal of manufactured nanomaterials" [4], adopts a pragmatic approach, proposing "benchmark exposure levels" in order for a defensible safety level to be attained. These values, however, do not offer the same safety as health-based workplace limit values. Based upon the NIOSH proposal, 0.066 times the workplace limit value is for example recommended as the mass concentration for insoluble nanomaterials. As an alternative, the lower limit for the ubiquitous concentrations in contaminated areas of 20 000 particles/cm³ is proposed as a benchmark. The authors probably had in mind a diameter range for which this maximum concentration should apply; such a range is not stated in the document, however.

A value of 10 000 fibres/m³ is recommended for fibrous nanomaterials, with reference to the British guide value for asbestos during remediation work.

Requirements for a provisional assessment criterion

Under no circumstances should the recommended benchmark levels proposed here be confused with health-based workplace limit values. These recommended benchmark levels and the measurement methods and strategies upon which they are based must be trialled in practice, and if necessary adjusted in consideration of new findings. The IFA will seek discussion of this issue in a suitable form with the users.

A pragmatic proposal for assessment of the effectiveness of protective measures must take account of the following requirements, which if applied consistently are to some extent contradictory:

The OECD's Working Party on Manufactured Nanomaterials has agreed upon a prioritized list of nanomaterials which are to be addressed, and has revised this list again at its seventh conference [6]. The table shows the particle number concentration for the majority of these materials (and also for typical respirable dust [7]) which is necessary in order for a mass concentration of 0.1 mg/m³ to be reached at a given dimension of the particles (20, 50, 100, 200 nm).

N: particle number concentration required for attainment of a mass concentration of 0.1 mg/m³ with particles of the stated size in nm.

The substances stated in the OECD list for which model calculations have not been performed here are:

The table also shows that the range in both the size of the nanoparticles and their density over more than one order of magnitude results in a range in particle number concentration of over five orders of magnitude. This cannot be covered by current instruments. The size and density of the nanoparticles must therefore be employed as classification criteria for derivation of the recommended exposure limits.

In view of the prevailing uncertainty concerning the effect of nanoparticles and the need to find pragmatic solutions for company level, the IFA proposes the following recommended benchmark levels as increases over the background exposure during an entire shift (8 hrs) for monitoring the effectiveness of protective measures in the plants, based upon its experience in measurement and the detection limits of the measurement methods currently employed. Information on the measurement of this background exposure can be found in the proposal for a tiered type measurement strategy [10]. These recommended benchmark levels are geared to minimizing the exposure in accordance with the state of the art, and are not substantiated toxicologically. Even where these recommended exposure levels are observed, a health risk may still exist for the employees. Depending upon the chemical composition, occupational exposure limit values for particular substances may have to be considered.

Reception and discussion of the proposed assessment metrics

Since the first proposal for assessment metrics was made in mid-2009, a number of limit values have been published at national and international level. In 2009 for example, the MAK Commission published a health-based value of 0.1 mg/m³ for zinc oxide (respirable fraction) in consideration of the effect of zinc oxide smoke [12]. The value proposed by the IFA for zinc oxide nanoparticles of 40 000 particles/cm³ approximates to this mass concentration; for particles smaller than 100 nm, the value remains substantially below this mass concentration.

As already reported, NIOSH proposed a value of 0.3 mg/m³ in 2011 for ultrafine/nanoscale titanium dioxide, based upon toxicological findings for the avoidance of lung cancer. For titanium oxide particles 100 nm in size, this would correspond to a particle number concentration of approximately 135 000 particles/cm³. This value can be monitored easily using current measurement technology, and further reduction appears possible. Conversely, the particle number concentration of 40 000 particles/cm³ for particles 50 nm in size proposed by the IFA corresponds to a mass concentration of 0.011 mg/m³. This is therefore also substantially below the value proposed by NIOSH.

The Dutch parliament charged the Knowledge and Information Centre Risks of Nanotechnology (KIR-nano), in co-operation with the National Institute for Public Health and Environment (RIVM), with the task of examining whether provisional reference values could be derived for nanomaterials. The experts concluded that at the present time, they were not aware of any method better than that of the IFA for deriving provisional reference values for nanomaterials [13]. In August 2010, nano reference values (NRVs) based upon the IFA concept were proposed by the Social and Economic Council (SER), an advisory comittee to the Dutch govenrnment and Parliament, and recommended to companies for application until such time that health-based limit values have been defined [14]. At the same time, the Dutch government sponsored a project for evaluating the facility for implementation of the proposed values. The results of this project and the general suitability of the nano reference values were presented at a workshop in the Hague in September 2011 [15]. It was reported that the IFA's concept for evaluation of the protective measures had proved effective in the Netherlands under the name "Nano Reference Values".

In 2008, BASF SE supplied information to the US Environmental Protection Agency in accordance with the provisions (Section 8e of the Toxic Substances Control Act) on a sub-chronic inhalation study on Wistar rats involving carbon nanotubes [16]. BASF SE states that under the study conditions described, the NOEL must be below 0.1 mg/m³. Based upon this information, Nanocyl in Belgium reports a value of 0.0025 mg/m³ for the MW CNTs which it manufactures [17].

In the CIB of December 2010, NIOSH recommends limiting the concentration of carbon nanotubes in workplace atmospheres to below 0.007 mg/m³, measured in terms of elementary carbon in accordance with NIOSH method 5040. Information on comprehensive protective measures can be found in Chapter 6 of the CIB.

In short, it can be said that the sampling and measurement methods for CNTs are still at the scientific test stage. Suitable, simple methods for practical monitoring of exposure in commercial enterprises do not yet exist. The implementation of protective measures is therefore all the more important.

[2] Tonerstäube am Arbeitsplatz (in German)

[4] Guide to safe handling and disposal of manufactured nanomaterials

[5] Communication from the Commission on the precautionary principle

[6] List of Manufactured Nanomaterials and list of endpoints for phase one of the sponsorship programme for the testing of manufactured nanomaterials: revision (PDF, 244 KB). OECD